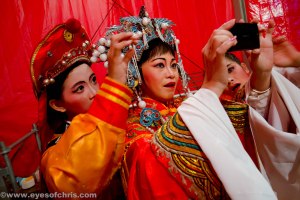 Very few chances you get to watch Chinese opera for free, in fact, very few places in China you can watch it at all, but when it comes to each Hungry Ghost Festival in Hong Kong, numerous sports grounds set up make shift stages, and Chinese Opera will be performed, not really for human, but for the ghosts, or their ancestors. 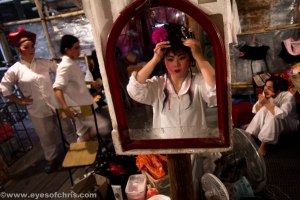 The festival originated from Chiu Chow (Guang Dong province), they believe the seventh month of the Lunar calender is the month that ghosts roam the human world, one of the many rituals is the Opera for the ghosts. Usually plays that start late and finish in the wee hours of the morning, but in Hong Kong, where lots of Chiu Chow people lives, they start early cause everything has to finish before 11pm, due to the noise restriction.

Nowadays all troops came from Chiu Chow area, each year they tour around Hong Kong, bring along their instruments, boxes of costumes, stage settings and everything you imagine a Chinese Opera needs, but you probably don’t expect tents and cooking utensils.

“We only live like this while performing in Hong Kong” Wang told me, a male artist who has been in this art form for 25 years. Right behind boxes of clothes and ornaments in the backstage, are tents with electric fans attached, outside the stage are plastic stools, folding tables, wok and food. Just when you think maybe only a handful of them sleep on the stage for security reason, then you find out the rest of them are underneath the elevated platform, “accommodation is just too expensive in Hong Kong!” Wang added,”and this industry is getting tougher, young people are not interested.” 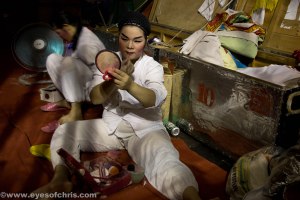 Seventh month of the Lunar calender always falls on the hottest time of a year, Hong Kong has particularly hot evenings from too much concrete high rises. During my visits, artists started applying make up before sunset, many seated outside for it was less hot and better illuminated; while standing by during the play, they would seat in front of an electric fan and dress as little as possible; then after the play, immediately left the stage to do their chores like clothes hand-washing, munching and shower taking.

Chinese opera attracts people because on the stage the singing is superb, movements are graceful, all those embroidered costumes and heavily ornamented head-pieces are just too beautiful and glamorous, but this slumming right behind the stage, just doesn’t make any sense to me. Who cares? probably only ghosts would.