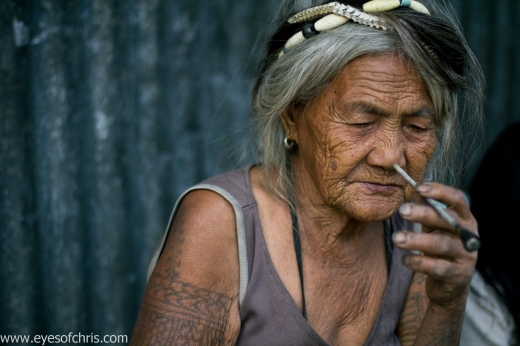 What? was that a legendary snake bone woman?

I was meant to go to Kalinga, a province in the North Luzon, Philippines, but a friendly, sometimes frivolous local boy on the jeepney invited me to his village, I thought…… why not!

The jeepney came to it’s destination called Sadanga, a tiny town hidden from the highway, then I realize his village is not Sadanga, but 3km further up the mountain through rice terraces, a village called Belwang, at the top of a hill surrounded by 360 degrees of rice terraces, it’s beauty is like a lost twin of the famous Banuae, only here I was the only foreigner.

Next dawnwhen the valley was still blanketed in mountain mist, women started going out to their farm, one of them was a heavily tattooed grandma, serious hunchback like the shape of a question mark, quickly moved down the terraces with two walking sticks and a pipe in between her lips.

From my observation it’s only women and teenagers work in the farm, maybe men do something more heavy duty, but as rice farming is such demanding and important work, there’s no place for the weak and pathetic, I think therefor tattoo, an ancient tribal practice shows courage and fierceness, was considered attractive on a woman.

Of course, by the invasion of global definition of beauty, new generations don’t want to get tattoos like that anymore, same to their traditional clothing and accessories. So when I saw that grandma with a snake bone on her head, I thought, wow that’s fierce! couldn’t believe something so original still existing.

I had to ask their permission for photos. First they were a bit uncomfortable, but as soon as they saw their pictures from my camera, they were even posing for me by taking a few puff with their unique long pipe, which also used as a hair pieces. In stead of giving you pretty and femininity, there was fierceness, sophistication, even a hint of bossiness, absolutely captivating.

After the shooting, they demanded me a copy of their photo and a box of matches. Yes madam, salute to the Philippines mountain spice girls. 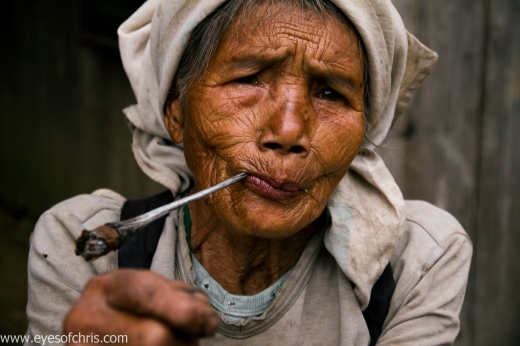